1 OUT OF 10 CHILDREN UNKNOWING VICTIMS OF IDENTITY THEFT

A Carnegie Mellon Cylab research study was conducted in 2010 to study the incidence of identity theft in the U.S.  They found that one out of ten children were unknowing victims of identity theft and that children were 51 times more likely to fall victim than adults.  The profound impact is the potential that a child will not be able to get a student loan, rent an apartment, or get a job when they become young adults.

Schools are targets for cyber hackers since they store millions of students and families sensitive personal information, including social security numbers, parents’ financial information, and student medical data. The Carnegie Mellon study found that a child’s identity can be paired with any name and birthdate to create a false identity that can be used to commit identity theft or medical fraud. Parents don’t normally check whether their children’s SSN is being used by fraudsters, which gives these bad actors many years to commit crimes.

There are several examples of child identity theft in the Carnegie Mellon Cylab Study highlighting this problem. The identity recovery examples were provided by AllClearID, an identity protection company based in Austin TX.

Greg discovered that the misuse of his 18-year-old daughter’s Social Security number spanned her entire lifetime, due to an accidental transposition of some of the numbers. Although there was no malice, Greg’s daughter still had a credit file using her SSN with over $325,000 in debt. This issue put their plans for college loans and scholarships in jeopardy.

Greg contacted law enforcement, but the police could not issue a complaint without a credit report. To further complicate matters, the credit agency denied Greg’s request to pull a report because the owner was a minor.

“My oldest [daughter] just graduated [from college],” Greg said. “We thought this should be a piece of cake. But especially for my younger daughter, it would have been devastating if it hurt her chances of getting into college.”

All Clear ID discovered that a 17-year-old girl has over $725,000 in debt. Chris’s daughter’s Social Security number was linked to eight different suspects living in border states. The suspects opened 42 open accounts including mortgages, auto loans, credit cards, and bills in collections including medical, credit cards, and utilities.

Nathan, a 14-year-old, had a credit history that went back more than 10 years. Several credit cards and a foreclosed mortgage were already in his credit history, all from a suspect living in California. The thief established good credit for the first 10 years and was able to finance a $605,000 home in CA through first and second mortgages. He also used the boy’s SSN to open several credit accounts.

Then, the home loans went into default and the bank foreclosed. Additionally, a credit account with over $2,000 in unpaid charges went into collections. His parents led a police report and the fraud was assessed at over $607,000.

“I was very upset; you just don’t think someone will use your child’s identity,” Nathan’s father said. “He was only three years old when somebody started using it, and the thought of that made me sick to my stomach.”

Lindsey applied for an internship during college, and after accepting an offer, a background check revealed someone was using her Social Security number for employment – and had been for many years – accidentally transposing some of the numbers. Lindsey was classified “unemployable” because she did not “own” her SSN. She spent months resolving issues with credit bureaus, the Social Security Administration, and her employer.

“It was like a full-time job,” Lindsay recalled. “I spent hours and hours doing paperwork, standing in line, and sitting on the phone computers. I’m extremely careful now…I check my credit incessantly.”

Click here to see ABC News report on the results of the Carnegie Mellon Cylab Study. 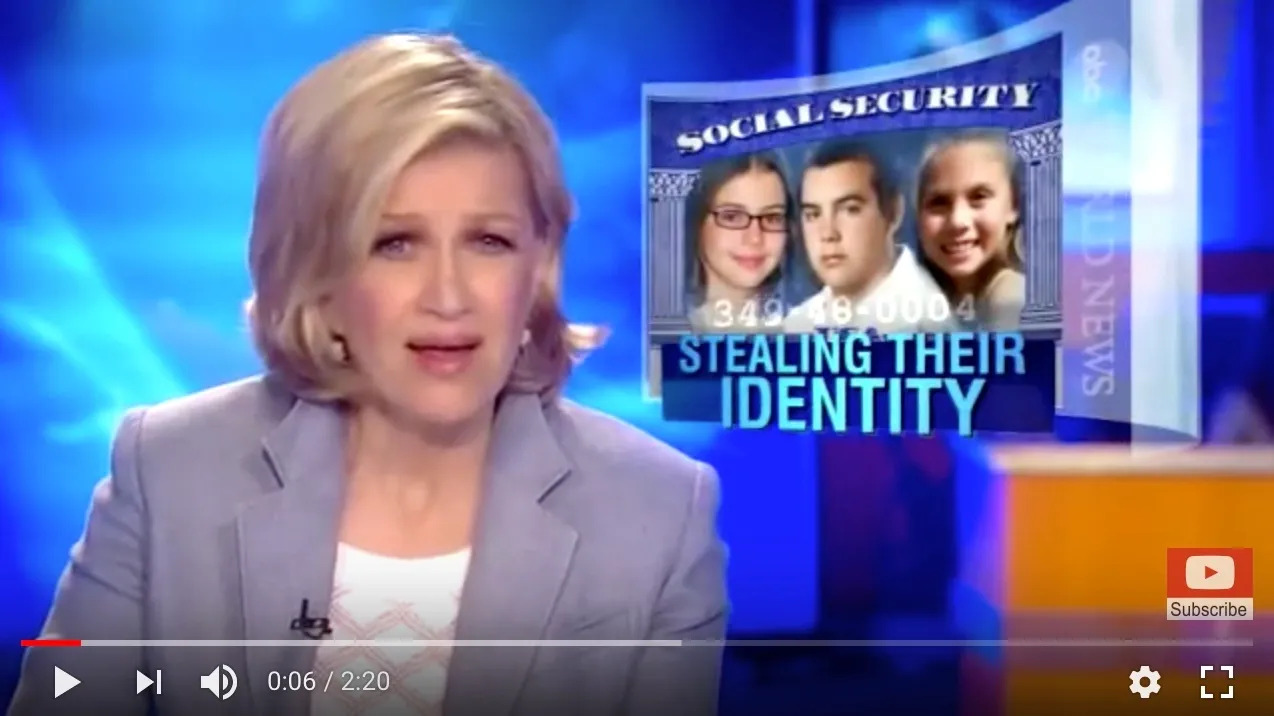